On Sept. 3, the NATO flagship HNLMS Rotterdam was able to deliver medical assistance off the northeast coast of Somalia, while conducting its counter piracy mission in Operation Ocean Shield. Shortly after sunrise, Rotterdam anchored a few miles off the coast near the village of Bandar Murcayo and deployed a medical team and improvised facilities via landing craft. As the craft approached the coastline, the villagers used small boats to reach the medical team aboard the landing craft, where they were able to receive basic medical examinations and assistance. The following day, the flagship moved to the coast off Xabo and provided similar medical assistance for the people there.


During the two-day operation, the medical team provided assistance to over 150 villagers. "During these medical visits we saw a lot of villagers with a variety of medical issues” said Surgeon Capt. Chris Bleeker, the anaesthetist on board the flagship who led the deployed medical team. "Some people were able to be treated fully; others were offered partial treatment within the facilities available. All the villagers were happy to receive medical attention, some for the first time ever, and all went back home smiling”, said Capt. Bleeker.

The provision of this type of medical support is not an integral part of the Operation Ocean Shield Mandate, but is occasionally conducted when resources and the tactical situation permit. The NATO task force is in the region to conduct maritime operations off the Horn of Africa in to deter and disrupt pirate activities in conjunction with other nations and organisations. NATO and other deployed naval forces maintain international law on the High Seas, reduce threats to international shipping routes and assist in stabilizing the maritime environment in the region. 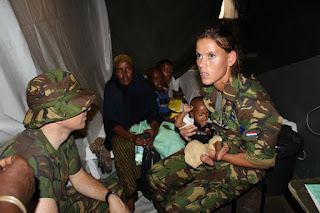 With the counter piracy effort increasingly effective and the number of pirate attacks low because of the current monsoon period, HNLMS Rotterdam has used this quiet time to go out and meet the local population at sea. "To further improve our effectiveness, we must seek ways to stop the pirates from going to sea in the first place,” said Commodore Ben Bekkering, Commander of NATO Task Force 508. "Our ships patrolled coastal waters, talking to dhows and skiffs and listening to the stories of the crews. This effort led to a meeting two weeks ago between a group of village elders from the region and myself on board Rotterdam. There, elders requested general support, to reassure the people and create an atmosphere where villagers stand up against the pirates and inform authorities of their activities. This medical assistance is an example of how the NATO ships can use their facilities to help the Somali people. Looking at all the faces on board the landing craft, we can leave knowing we have made a small difference to the lives of these villagers and have been able to put our skills to practical use. For us this is a small step, but for the mission this is considerable progress.”

Background Information:
NATO has contributed to the international counter piracy effort off the Horn of Africa since December 2008. The mission has expanded from escorting UN and World Food Programme Shipping under Operation Allied Provider and protecting merchant traffic in the Gulf of Aden under Operation Allied Protector. In addition to these activities and as part of the latest mission, Operation Ocean Shield, NATO is working with other international bodies to help develop capacity of countries in the region to tackle piracy on their own.

Standing NATO Maritime Group 1 is permanently assigned to NATO. It is a multi-national Naval Group that provides the NATO Alliance with the ability to quickly respond to crisis situations anywhere in the world. A capable, stand-alone task group and one of four standing maritime elements that form a flexible core around which NATO can build a larger force to meet a wide range of missions that will include non-combatant evacuations, consequence management, counter terrorism, crisis response, embargo operations, etc.

HNLMS Rotterdam, flagship of NATO Task Force 508, continues her patrol within Operation Ocean Shield, the NATO-contribution to the international counter piracy effort in the waters around the Horn of Africa. The ship has 350 people embarked, from all services and from 8 NATO-countries.

NATO Allies agreed on 19 March 2012 to extend Operation Ocean Shield for a further two years until the end of 2014.