''NATO after ISAF – Staying Successful Together'' 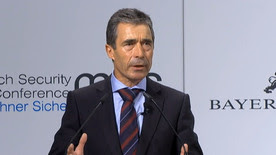 The theme of our discussion today is Transatlantic security. And like Vice President Biden, I consider US and Europe indispensable partners.

Today I would like to talk about NATO after 2014 when we complete the ISAF mission in Afghanistan. The end of NATO’s biggest operation presents us with a big opportunity.

An opportunity to generate key capabilities. To engage robustly with  new geopolitical realities.  And to rebalance our priorities and commitments.  In other words, an opportunity to plan for the future.
That plan must answer three questions:  What will NATO do next?  How will we do it?  And what kind of Alliance will we be?

So let me answer those questions.  First, what will NATO do next?

We will continue to respond to crises whenever, and wherever, the Allies judge their security interests are at stake.  Because this is our core business.

When I look at our world, I see an arc of crises stretching from the Sahel to Central Asia.

Let me stress. This does not mean we will have to intervene everywhere.  Nor that we are set for confrontation.  But it does mean we must stand ready to deter, and defend against, any threat.

So we have to keep our operational edge, and  retain the complete range of capabilities. Among these, I see increased importance for missile defence, cyber defence, and special forces.

Missile defence is a core element of our collective defence.  And the deployment of Patriot missiles to Turkey is a real response to a real threat.

Many European Allies already contribute to NATO’s missile defence system.  But I could see other possible contributions. For instance, European navies upgrading their ships with missile defence radars and interceptors so they can deploy alongside United States vessels.

We must also improve our cyber-resilience.  I see a critical role for NATO in defining a common approach among the Allies.  In training.  And in providing specialist assistance to Allies who come under cyber attack.

We will also need forces with the skills and speed to act decisively.  I see a vital role for NATO’s new Special Operations Forces Headquarters in planning and coordinating missions.  And in improving the capability of our special operations forces to work together.

All this we CAN do.  So that NATO remains the gold standard of Euro-Atlantic security in the 21st century.
But how?
We must build on what we have gained in operations such as Afghanistan.  Not cash in what some may perceive as the post-ISAF dividend.

In this age of austerity, that looks like an attractive option.  But it would be the wrong option.  Because security challenges won’t wait while we fix our finances.  And more cuts now  will lead to greater insecurity in the future, at a cost we simply can’t afford.  We saw this after the Cold War, when we were ill prepared to respond to the crises in the Balkans.

Now, we need to reinvest  the ISAF dividend in defence.  And get the maximum return from it, including through NATO’s Connected Forces and Smart Defence initiatives.

We need a multinational force we can deploy quickly when needed.  Fortunately, we already have it.  It’s called the NATO Response Force.

I see us revitalising this Force, to keep our ability to train and operate together, as Allies, and with partners.

To take advantage of the United States’ decision to rotate dedicated units to Europe.  And to conduct more demanding, more realistic, and more frequent exercises.  The NATO Response Force should become the engine of our future readiness.

Multinational cooperation is also key to keeping our costs down, and our capabilities strong.

For example, through Smart Defence, we are fielding a new Alliance hub for intelligence, surveillance and reconnaissance, to provide political and military decisions makers with more accurate and up-to-date information.  Our lessons learned from Afghanistan and Libya have shown how crucial such a hub will be for any future operation.

I see us connecting more closely with our most able operational partners. Because keeping close links in peacetime will help us work better together in times of crisis.

I see us reinforcing our cooperation with the United Nations and the European Union.  So that we can respond together to complex crises.

I also see us deepening our strategic relationship with Russia So we can build long-lasting security and stability for all of us in the Euro-Atlantic community.

Overall, I see our Alliance shifting from operational engagement to operational readiness.  From campaign to contingency.  From deployed NATO to prepared NATO.

NATO will remain an Alliance built on shared values and interests; with its door open for new members who share those values; and defined by the transatlantic bond.

We know how valuable this bond is.  We know it does not come for free.

And we also know that in the decade since 2001, the US share of NATO defence expenditure has increased from 63% to 72%.  While in the last few years, all but three European Allies have cut their defence budget, in some cases by up to 20 percent.

I am concerned about this gap in defence spending.  But I am even more concerned by the gap in some key capabilities.  And we need to take concrete action to correct this.

For example, I would like to see us moving towards the day when no single Ally provides more than 50% of certain critical capabilities.

This will require European Allies to do more.  And it shows why initiatives by European Allies are so vital.  Because a strong European contribution to NATO’s capabilities will sustain a strong US commitment to NATO.

The good news is that the balance is already improving in some critical areas.  For example, in large transport aircraft.

However, we also need to re-balance politically.  All Allies must show the political will to support each other.  So we must live up to our role as the political forum for transatlantic consultations on common security concerns, including on those that  lie beyond the Euro-Atlantic area.

Re-balancing requires real investment.  But it is worth it.  Because collective power makes all of us stronger.   And in our interconnected world, we will either succeed collectively or fail individually.

My vision for the Alliance’s future builds on the successes of the past.  It retains what makes our Alliance unique and indispensable.  It rebalances our collective military capacity.  And it reinforces our common political resolve.  Because now and after 2014, we can only stay successful together.