One hundred and two incidents of piracy and armed robbery have been reported for the first quarter of 2012, with dangerously increasing numbers in West African waters, according to figures released today in the International Chamber of Commerce (ICC) International Maritime Bureau’s (IMB) global piracy report.

In total, 11 vessels were reported hijacked worldwide, with 212 crew members taken hostage and four crew killed. A further 45 vessels were boarded, with 32 attempted attacks and 14 vessels fired upon – the latter all attributed to either Somali or Nigerian pirates.

Nigerian pirates widening range
Ten reports were received from Nigeria in the beginning of 2012, equalling the same number reported in Nigeria for the whole of last year. A further attack in neighbouring Benin has also been attributed to Nigerian pirates. The reports include the hijackings of one product and one chemical tanker, between which 42 crewmembers were taken hostage. 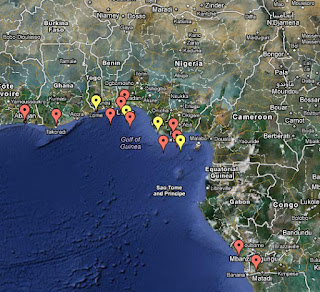 “Nigerian piracy is increasing in incidence and extending in range,” said Pottengal Mukundan, Director of the IMB Piracy Reporting Centre, which has been monitoring piracy worldwide since 1991. “At least six of the 11 reported incidents in Nigeria occurred at distances greater than 70 nautical miles from the coast, which suggests that fishing vessels are being used as motherships to attack shipping further afield.”

Attacks in Nigerian coastal waters have further resulted in at least three crew kidnapped from their anchored vessel.

“While the number of reported incidents in Nigeria is still less than Somalia, and hijacked vessels are under control of the pirates for days rather than months, the level of violence against crew is dangerously high,” added Mr Mukundan.

Threat still high off Somalia despite fewer incidents
Somalia continues to dominate figures with 43 attacks, including the hijacking of nine vessels and the taking hostage of 144 crew. Four dhows and a fishing vessel, softer targets that make for ideal motherships, were among the highjacked vessels. Somali pirates were also responsible for the hijacking of a Panamax bulk carrier at the end of March.

But while the number of 2012 incidents and hijackings are less than reports for the same period in 2011 (97 incidents, 16 hijackings), it is unlikely that the threat of Somali piracy will diminish in the short to medium term unless further actions are taken.

The report attributes the reduction in overall attacks to the disruptive actions and pre-emptive strikes by the navies in the region, which disrupted numerous pirate action groups, emphasizing the importance of the navies in both deterring and combating Somali piracy.

The application of Best Management Practices and the increasing use of privately contracted armed security personnel (PCASP) also contributed to the decrease in the hijackings. In the incidents reported to the Piracy Reporting Centre, more vessels with PCASP have been reported in the first quarter than those not armed.

Until a comprehensive legal framework is in place, however, owners and Masters should follow the International Maritime Organization and industry guidelines on the carriage of PCASP.

“The EU announcement to expand their anti-piracy mission to target pirates ashore is another welcome move that could further threaten the Somali piracy model,” Mr Mukundan said.

As of 31 March 2012, suspected Somali pirates still held 15 vessels with 253 crew
members as hostages, with an additional 49 crew members being held hostage on land.

Increased attacks in Indonesia
Elsewhere, there has been a noticeable increase in the number of armed robbery attacks in the Indonesian archipelago, up from five in the first quarter of 2011 to 18 in 2012.

The report shows that all types of vessels in Indonesia have been targeted and that the attacks aimed at theft from those vessels. Fifteen vessels were boarded – 13 while anchored, one while berthed and one underway. Five crew members were taken hostage overall.

IMB offers the latest piracy reports free of charge. To request a PDF version of the report by email, please visit: http://www.icc-ccs.org/requestreport

Latest attacks may also be viewed on the IMB Live Piracy Map at: http://www.icc-ccs.org/livepiracymap