On 11 May EU NAVFOR frigate HNLMS Van Amstel released a fishing dhow and her Iranian crew off the coast of Somalia. The dhow had been pirated 10 days earlier and was being used to carry out pirate attacks on merchant vessels.

Yesterday afternoon, during a surveillance flight 400 nautical miles off the Somali coast, the helicopter from Van Amstel identified the dhow towing two skiffs, with what looked like piracy-related equipment on board, such as ladders. 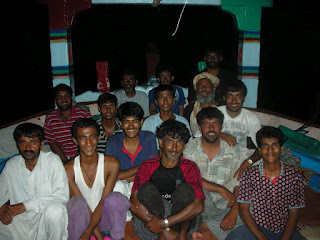 The fishing dhow had been pirated off the Omani coast, and is probably related to the unsuccessful attack against MV Super Lady on May 9, only two days before.

By this action, EU NAVFOR frigate Van Amstel has rendered inoperative a pirate group and its mothership. Above all the Dutch sailors freed the very relieved and happy Iranian crew, who expressed their gratitude and joy at being able to now go back home to their families.