Earlier today, following the decision taken on 23 March 2012 by the Council of the European Union to allow the EU Naval Force to take disruption action against known pirate supplies on the shore, EU forces conducted an operation to destroy pirate equipment on the Somali coastline. 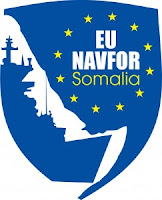 The operation was conducted in accordance with the United Nations Security Council Resolution 1851 and has the full support of the Transitional Federal Government of Somalia. The focused, precise and proportionate action was conducted from the air and all forces returned safely to EU warships on completion. Whilst assessment is on-going, surveillance of the area during the action indicates that no Somalis were injured ashore as a result of EU action.

Speaking about the operation, the Operation Commander of the EU Naval Force, Rear Admiral Duncan Potts said “We believe this action by the EU Naval Force will further increase the pressure on, and disrupt pirates’ efforts to get out to sea to attack merchant shipping and dhows. The local Somali people and fishermen – many of whom have suffered so much because of piracy in the region, can be reassured that our focus was on known pirate supplies and will remain so in the future.”

At no point did EU Naval Force ‘boots’ go ashore. Rear Admiral Potts went on to say “The EU Naval Force action against pirate supplies on the shoreline is merely an extension of the disruption actions carried out against pirate ships at sea, and Operation Atalanta remains committed to fighting piracy off the Horn of Africa and the humanitarian mission of protecting World Food Programme ships that bring vital aid to the Somali people.”

Operation Atalanta is part of the EU’s comprehensive approach to tackling symptoms and root causes of piracy in the Horn of Africa and the EU strategic framework for that region adopted in November 2011. Currently there are 9 warships in the EU Naval Force and 5 Maritime Patrol Aircraft.

The reach of Somali pirates is vast; they have attacked merchant ships up to 1,750 miles off the Somali coast. Preventing them getting out to sea is a crucial step in removing their impunity ashore and to further the success of counter-piracy operations.