Some interesting footage can be found on YouTube related to the mysterious 330mm rocket reportedly used in the August 21st chemical attack on suburbs of Damascus. Imagery of the rockets, or rather what remained of their engine/tail section, caused several questions to be asked. For instance, what could the range be of these odd contraptions unknown to current army arsenals in the world?

I have argued that the design of the rocket automatically implies it cannot have much of a range. Certainly not 10 kms or more, given the lack of a guidance mechanism (or the gyroscopic effect of being spin-stabilized, which it is not). It also has a flat head, causing considerable aerodynamic drag. Still, some sources claim the eastern suburbs of Damascus were hit by chemical warheads of this rocket fired from over ten kilometers distance.

The first video seems to confirm the small range of this ordnance. It was taken from Darayya, a suburb to the south-west of Damascus. The rocket, with a High Explosive (HE) warhead, is fired from the Al Mezzeh military airport. In the background the 'Rif Dimashq' mountain range is visible. Also visible is the rocket itself (proof of its low speed) as it flies over the cameraman, the engine still running (i.e. not in true ballistic flight). The airport is firmly in the hand of government troops.


To get an idea of the range of this particular rocket, I have drawn a line from the airport to the centre of Darayya. The line is some 2 kms long: 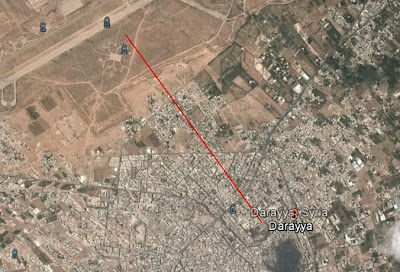 In the next video, several 330 mm rockets (with a HE warhead) can be seen flying through the air (= low speed). See 1'11" onwards. According to the accompanying text, the video was taken in Al-Outaiba, an Eastern suburb of Damascus. Also note that the rocket is evidently not very precise.

Finally, click here (embedding disabled) for a video that shows how insurgents are disassembling a 330mm rocket and take out what they say is TNT. Don't try this at home!

The images and the characteristics of the rocket lead me to believe that an assumption of Human Rights Watch is wrong. The organization has repeatedly stated that on August 21st, the Eastern suburbs of Damascus were hit with 330mm rockets with a chemical warhead. Based on the reported azimuth of one of those rockets, HRW came to the conclusion that the point of fire must have been a government position on Mount Qasioun, 9.6 kilometers to the West.

But how does Human Rights Watch know the range of the 330mm rocket? It doesn't and has admitted the rocket is a unknown. Yet, HRW does assert that 9.6 kilometers is "well within range of most rocket systems." That is all, and of course it's just an assumption. Unfortunately, the organization has not reacted to questions I asked several of its representatives, including its Director, Kenneth Roth.

We don’t know the firing range for the second type of rocket used, the 330mm rocket that hit Ein Tarma (impact site number 4). But that site is 9.6 kilometers away from the main Republican Guard base in Damascus, well within range of most rocket systems.
(http://www.hrw.org/news/2013/09/26/syria-s-chemical-weapons-russia-factor) 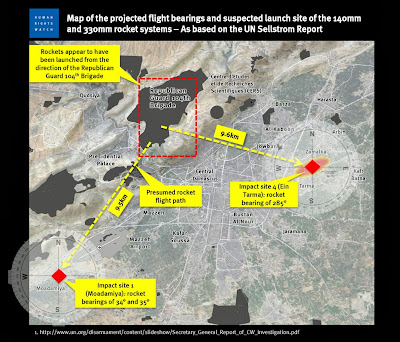